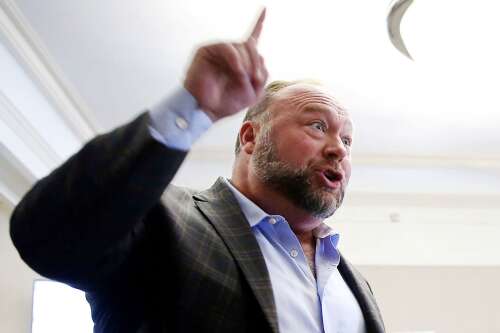 Alex Jones speaks to the media during a lunch break during his trial at the Travis County Courthouse in Austin, Texas July 26, 2022. Jones is set to face punishment for allegedly giving to unauthorized persons highly sensitive documents, including medical records of relatives of victims of the Sandy Hook Elementary School shooting. (Briana Sanchez/Austin American-Statesman via AP, Pool, File)

Alex Jones has been accused of paying millions to himself and loved ones while declaring himself bankrupt in an effort to avoid compensating the families of the victims of the Sandy Elementary School shooting Hook.

The families of the nine Sandy Hook victims filed a petition Thursday in federal bankruptcy court in Houston, asking Jones to relinquish control of Free Speech Systems, the parent company of his far-right Infowars website.

The explosive internet personality previously used the platform to claim the 2012 massacre was a hoax involving crisis actors, sparking a series of libel lawsuits from those affected by the school shooting.

A total of 26 people, 20 elementary students and six teachers or administrators, were killed in the violence inside the school in Newtown, Connecticut.

“Since the Sandy Hook families filed their lawsuits, Debtor has consistently transferred millions of dollars to Alex Jones and his relatives and insider entities,” the filing states.

The families also requested that the court appoint a committee to investigate Jones and the conduct of the business to “ensure transparency, accountability and maximize the debtor’s estate for all creditors.”

Free Speech Systems filed for bankruptcy last month, citing its $54 million debt to a company called PQPR, which is owned by Jones’ parents. According to the court filing, approximately 72% of payments to PQPR go to Jones while the rest goes to his mother and father.

In the summer of 2021, after default judgments were rendered in the Sandy Hook families’ lawsuits in Texas and then Connecticut, Free Speech Systems allegedly siphoned between $11,000 per day and $11,000 per week from the PQPR, according to the court record.

In total, Jones allegedly transferred between $18 million and $62 million from Free Speech Systems amid the Sandy Hook lawsuits.

Earlier this month, a Texas jury ordered Jones to pay $45.2 million in punitive damages to the parents of one of the children killed at Sandy Hook, and another $4.1 million in compensatory damages.

His lawyers have announced their intention to appeal.