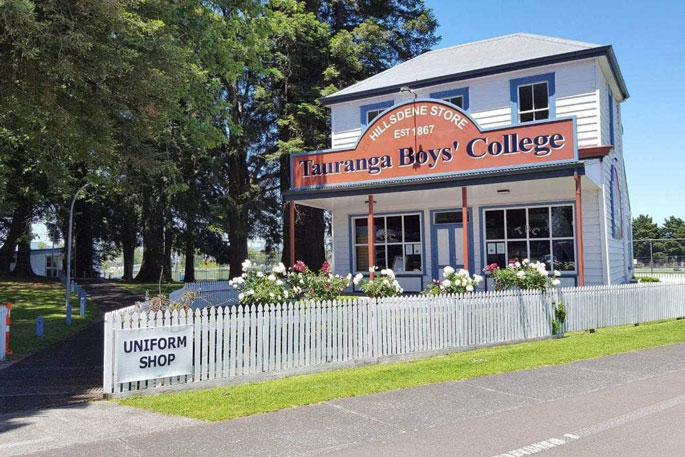 A Bay of Plenty school is accused of being ‘morally bankrupt’ by a former pupil who was allegedly sexually abused by a teacher.

Tauranga Boys’ College is under investigation by the Chief Ombudsman for its response to allegations of abuse of former student Glenn Marshall by his former English teacher, Pinky Green, who taught at the school from 1960 to 1988.

When Marshall, now 52, ​​recently requested documents from the school under the Official Information Act regarding his handling of the abuse, the school charged him $1,094 to turn over the information, an accusation which he says is “unfair and unreasonable”.

“In my opinion, given the circumstances of my request, accusing me is an example of moral bankruptcy and a continued failure of Tauranga Boys’ College to consider the dignity and mana of all of Green’s victims,” ​​Marshall says. .

“If Tauranga Boys’ College is allowed to ‘get away with it’ by taking the OIA request on me, then that is a profound example of the ‘chilling effect’, that it discourages other historical sexual assault victims who have been abused to seek information.”

School board president Nikki Iuli says the fee is to help cover costs.

“Each request for information requires significant administrative time and resources, paid for from the school’s operating budget.”

She says that under the law the college is allowed to charge “a small fee to recover our costs”.

“In this case, we billed Mr. Marshall for the OIA request that required the most time and administrative resources to date,” she says.

“All other requests were met without incurring any costs.”

The college has undertaken two investigations into the alleged abuse.

The first was when Marshall initially complained about abuse in 1988.

A second investigation took place this year, with the school issuing a public apology “for historic instances of sexual proposals to former students by a former member of staff”.

Marshall was not interviewed in either the 1988 or 2022 surveys.

The school admits its recent abuse review was “insufficient”, in that Marshall and other victims were not interviewed, and that “Marshall’s experiences and the impact they had on him were not have not been addressed”.

Marshall referred the case to the mediator, saying the 2022 review was not independent because it was conducted by a lawyer appointed by the school’s insurer.

He also alleges that the school failed to provide all relevant documents to this lawyer.

“I was indecently assaulted by Green – forced to bend over and spanked with considerable force, but Tauranga Boys’ College still considers this prospecting,” he says.

In 1988, Marshall says Green summoned him to his private office, tilted the blind, then bent him over and spanked his buttocks with significant force.

Marshall was then proposed by Green.

When Marshall reported these incidents to the college principal at the time, three other students were identified who had had similar experiences.

After the incidents came to light in 1988, Green left college and took early retirement.

He died in January of this year.

Marshall says that after his main OIA request, on the 20th business day, which is the maximum time for a response under the OIA, the school’s attorney sent him an email stating that he needed another 20 working days.

On the 40th business day, he says the attorney emailed him saying he would have to pay $1,094 for the information and that after payment it would take up to 14 more days to release the information.

“The college regrets the time and resources it has devoted to this,” he says. “Not once have I complained about the considerable time I have spent on this case to date.”

The school’s attorney, Jenny Copeland of Copeland Ashcroft, set out the reasons for the charge in an email to Marshall, who Things saw.

She says the prosecution is “to recover reasonable costs involved in providing information”, saying it is in line with Justice Department guidelines for the Official Information Act.

She says this is the first indictment request and that the college has already provided information relating to the initial complaints “demonstrating significant transparency and accountability”.

Marshall says the OIA information released to date is “narrow in scope and content,” and that the $1094 fee relates to the main OIA request.

Marshall paid the fee, saying he didn’t want to delay the release of the information any further.

However, he is seeking reimbursement of the costs via a separate complaint to the Office of the Chief Ombudsman, which is already investigating the adequacy of the Tauranga Boys’ College Board’s 2022 response to concerns. raised by Marshall.

Since the school’s last survey this year, Marshall says other students have come forward who were at the school from 1960 through the 1980s.

In one incident, Green offered to change a grade if the student was willing to “pat Pinky’s butt with her hand.”

Another student said he was the subject of Green’s “attentions”, while another said he was “bribed, groomed and assaulted” by the teacher.